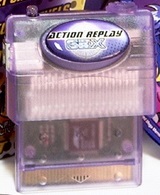 The Action Replay is a Game Enhancer device for the Game Boy Advance. It was created by Datel. As with most Action Replays it allows the user to input cheat codes. It is basically the same as the GameShark for Game Boy Advance, in fact there was software available that would turn the GameShark into a Action Replay. There was also a automatic game recognition system which automatically selected the cheat code list for the game that was inserted. It is also possible to download codes from Datel's website onto your PC and then transfer them to the Action Replay with a USB cord. Or you could simply type in the desired cheats using the included software and transfer them.

Datel does not have this on their support site anymore.

Just do the following:

Burn the files to CD. They are in CD structure, not ISO.

Place the CD in the CD-Drive, then install the software using the autoplay function.

Leave the CD in the Drive and connect your AR (while in your GBA) to your computer and turn on your GBA.

Your computer will automatically install the drivers and you will be adding codes in no time.

The Action Replay MAX Duo worked with the GBA and DS. Besides using codes, it also had the ability to save DS game saves onto a computer using a USB cable. Using this method, users could backup and restore saved game files. However, the device does not recognize any Pokémon save data located in its slot. Despite numerous updates to the device, there has been no explanation given as to why the device ignores Pokémon games.