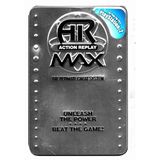 The Action Replay 2 is a Game Enhancer device for the PlayStation 2. It was created by Datel. It supported cheat code entry but did not have tools for creating them. This was also the first Action Replay to use encrypted codes. The use of encrypted codes was to keep cheat codes from competing Game Enhancer software being used. The Action Replay software was stored on a DVD and new cheats would be stored on a standard memory card. Initially, a cheat disc for PlayStation 1 games was included. A automatic game recognition system was added which would automatically select the game that was inserted into the system. There was also multi region DVD player software. Codes were updatable through the use of a Broadband adapter or could be manually entered through use of a controller or standard USB keyboard. Game Saves can be compressed on the memory card or can be transferred to and from a Pen Drive, which is included in some releases.

The broadband support is somewhat spotty as any broadband provider that uses PPPoE (Point to Point Protocol over Ethernet) will not work with this product.

Unfortunately, certain older versions of the Action Replay became incompatible with some revisions of the PlayStation 2. This was only correctable by getting a replacement disc from Datel.