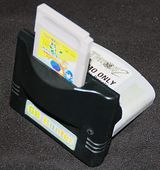 The outer shell is slightly different from the Game Booster and doesn't fit well in the cartridge slot. The built-in game Rebound Mission is no longer available in the GB Hunter.

A Nintendo 64 game must be insterted into the back of the cartridge. The cartridge must have a 6102 CIC chip. Most games used CIC but a few games such as Diddy Kong Racing, 1080 Snowboarding, NBA Courtside, The Legend of Zelda games, along with other first party and Rareware games can't be used. These games make use of other CIC types of chips.

The GB Hunter has no sound. It's possible the device was rushed into production before sound emulation could be perfected so it was left out. There is a built in jingle that plays with all the games but it is poorly composed and will likely result in people turning off the sound all-together.

Only regular Game Boy games work, no Game Boy Color games will work, and no pirate multi-carts or unliscensed games from Wisdom Tree and Sachen.

The GB Hunter can display Super Gameboy backgrounds and color settings. A color menu is also included where the palette can be altered (but not saved) for the games that work. There is also a trainer feature for finding cheat codes. A cheat menu for GameShark style codes is also included.