GSCentral is a Game Enhancer code site that was created by Jim Reinhart on January 22nd, 1998. The site has had two incarnations over the years. The recent incarnation, the GSCentral.org domain, is currently and solely maintained by Rune who is going by his first name, Jim on the forums.

As of September 16th, 2014, the forum was running version 5.1.3 of vBulletin's forum software. The state of the site became a shell of its former self. The code database no longer functioned properly, everything from the vBulletin 4 forum needed to be imported into the existing site, and there is insufficient activity except from the increasing number of spambots. The website went down towards the end of 2015 and has yet to re-open.

Originally, GSCentral used the domain, GSCentral.com. The site lasted until sometime late 2005/early 2006, when it disappeared without any particular notice. Eventually, a clone of the site, GSCentral.org, was produced after Rune was either banned or left on his own accord (depending on who you wish to believe). The GSCentral.com domain was given to Lazy Bastard by Stinky613, after Lazy Bastard promised it would never be given to Rune.

In early October, 2006, the majority of GSCentral's staff and veteran members left due to dislike of Rune's recent administrative actions and his ambiguity regarding when the code database would be up. The exodus of the GSCentral members began when Rune took down the forum (the only thing left at GSCentral), and took away the administrative powers of the very people who made the site worth visiting (Parasyte, Viper187, etc.). 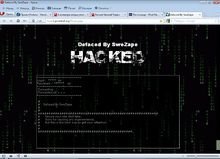 The result of the attack by SweZape. Picture provided by GSHI member, Unicode.

Sometime between late April and early May of 2012, GSCentral (amongst other websites) was defaced by a hacker known as SweZape. Apparently, SweZape's intentions were not to harm the site, but to alert Rune of the various exploits. In the index page of the forum, SweZape stated, "Secure your site next time. Sorry for causing any inconvenience.. But this is the best way to get your attention." The site returned online shortly after the attack, only to get hacked again by SweZape a week later. This time, the updates.php page of the forum was modified with the following message: "Hello again. Since nothing has changed since last time I'm giving you a last warning. Secure your site or next time wont be as harmless as these last warnings." As a result, the administrators of GSCentral worked closely (and formed a friendship) with SweZape in improving the security of the site.

On October 21st, 2013, a user on the vBulletin official forums by the name of "Mr.Danko Jones" (presumably Rune) posted that GSCentral has been hacked once again. The hacker of this attack has not been identified. In the post, the user stated that the hacker deleted all of the administrator and moderator accounts. This led to GSCentral switching over to the unstable, vBulletin 5 forum software and also a change of hosts.

Rune posted an update on November 12th, 2013, which stated that a man named David was responsible for hosting GSCentral since 2006, but they were ready to host the site elsewhere. By changing hosts, this introduced a few new problems for GSCentral. In order to import the contents of the previous board into the current one, Rune would need a working, complete version of the database. It is unknown why he didn't have a backup, but Dave did and he apparently gave Rune a faulty database. This angered GSCentral's returning members who questioned Rune's efforts in restoring the site to what it once was. Not much has been done for the site except the numerous vBulletin software and inaccessible code updates. Unfortunately, the forum became a haven for spambots selling dumps. There has been very few attempts at removing the spambots which could signify that Rune has accepted the fate of GSCentral.

The site went down towards the end of 2015 and never went back up since then. The last snapshot from wayback machine dates October 23, 2015.