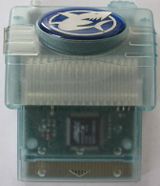 The GameShark is a Game Enhancer for Game Boy Advance. It allows the user to enter cheat codes and download gamesaves. It comes with software that allows for users to download new cheat codes, or enter them manually with a keyboard.

Version 1 was actually a rebranded Action Replay until InterAct sold the GameShark brand name to Mad Catz. Mad Catz promptly released it's own GameShark as Version 2.

InterAct released a single model, while Mad Catz released three. The first Mad Catz model was a white cartridge with a looped handle. This version came with PC syncing software and a USB cable but was incompatible with the GBASP. The second had a similar design, but was black instead of white and came with no software or a cable to use on the PC. The third was blocky and not sleek in design.