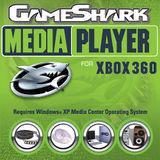 The GameShark Media Player for the Xbox 360 is actually not a Game Enhancer at all. Rather, it allows the user to stream video files (DivX, XviD, MPEG 1 and 2, AVI and WMV) from their PC to their networked 360 to allow for the media to viewed on the television. MP3 support is also available. It's likely the choice to not feature Power Saves or traditional cheat codes is due to Xbox360 taking a even larger focus on it's Xbox Live service and Power Saves can give new players an unfair advantage and hinder the online experience for some players.

Unlike previous GameSharks, this Game Shark is a online download only and cannot be purchased in stores.