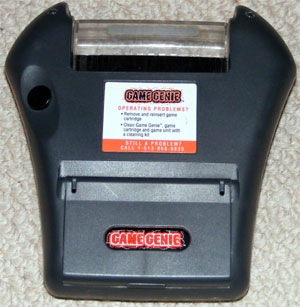 The Game Genie is a runtime ROM modification Game Enhancer device for the Sega Genesis. This is one of the many Game Genie products available. It was released by Galoob.

This Game Genie featured a interesting design; when the Game Genie is inserted into the Game Gear another cartridge port would pop up, in which a dust cover would need to be flipped open in order to insert a game. The code book could be stored in a small compartment, or the pages could actually be peeled off and stuck onto the back of the game, as they were stickers.

Like the Genesis Game Genie it was given Sega's seal of approval.

To access these, press the specific buttons in order while the code screen is displayed, or enter a code.

enter DEAD as a code
The screen will move up and down.

Up, Down Left Right
Congratulations! You've found the easy secret! Now find the hard ones!

Just wait 5 minutes or so
[Game Genie resets and displays an advertisement for itself, offering infinite lives and more power]