Difference between revisions of "Abystus"

Abystus is a current Administrator of GSHI and former Administrator of GSCentral. He is also a professional programmer and a well-known hacker in the game hacking scene. Joining the scene in 1998, he was formally known under the forum handles Codex~187, Epic_Cataclysm, and Akumajr while the gscentral.com forums were still active. During November of 2009, he joined the GSHI forms as an active hacker, yet remained an Administrator of GSCentral for some time after that. On August 1st, 2012, he was made a Chronicler, and later on March 8th, 2013, he was promoted to forum Administrator after stepping down from said position held on GSCentral forums.

On January 19th, 2012, Abystus released GG Mass Crypt, a small, .NET based application that converts raw ROM codes into Game Genie codes and vice versa. This program was possibly the first of its kind to convert multiple lines of code at a time. Its predecessors were only able to tediously convert a single line of code.

Initially, the program only had support for the Super Nintendo. Version 1.1 brought support for the Sega Genesis. There were plans for supporting additional systems such as the Nintendo Entertainment System, Nintendo Game Boy, and Sega Game Gear. A code porting feature was also planned, but never implemented. The program is now discontinued since it eventually got incorporated into GHTool early in its development.

This tool serves as a convenience for those who wish to not use any real "hacking" knowledge, but would also like to uncover new, unused content. Most of the content discovered using this program has been published in two pages of The Cutting Room Floor. The contributions to the Killer Instinct title can be found on this page. Similarly, the unused content for Killer Instinct 2 is located on this page. 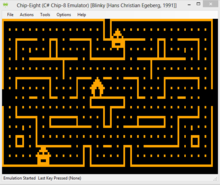 To improve his knowledge on emulation, Abystus created Chip-Eight, a CHIP-8 hacking emulator. Released May 30th, 2013, Chip-Eight came with numerous features and also the ability to emulate most CHIP-8 and SuperChip games and demos. The emulator is currently released under the GNU General Public License version 2 (GPLv2) and the source code is hosted on CodePlex.

Below is a list of features currently present in the Chip-Eight Hacking Emulator.

The Peeper was introduced on February 22nd, 2014. It was targeted to hackers who were interested in finding unused or hidden content in games by searching for specific terms. The program analyzes the contents of a rom and reports its findings in a neat, organized tree-view with the total amount of occurrences a specific term has been found, the address at which the term was found, and a snippet of relevant text that is 600 characters long. The Terms.txt file can be modified to add new words and can be accessed via the program's menu bar or manually.