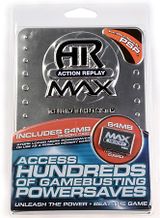 The Action Replay is a Game Enhancer device for the PlayStation Portable. It was created by Datel. More than one version was produced. The AR Max focused on the use of Power Saves.

Starting with the AR PSP version, code support was added. This version allows for the editing of codes during gameplay. The code list can be used by either connecting to the website with the PSP's wi-fi connection, or through connection to the PC. To actually use the AR PSP a battery enabler must be used first. This AR plugs into the memory card slot.

The Action Replay wasn't the first Game Enhancer released for the PSP. The most popular of these was CWCheat, which was distributed for free before the AR PSP release, and actually has a larger database of cheats. It was also coded so that it did not interfere with firmware updates. The Action Replay requires downloads in order to keep up compatibility with the firmware updates.