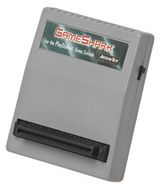 The GameShark for PlayStation is the first Game Enhancer to bear the GameShark name. It is actually a re-branded Action Replay. It was created by Datel, but distributed in the US by InterAct.

This version of the GameShark was a bit basic and lacked support for certain code types. Codes were toggable with a On/Off switch found on the GS. It plugged into the port on the back of the console.

This Version of the GameShark introduced code searching features without the need to connect to a PC (although connection to a PC allows for a larger range of addresses to be searched at once). By pressing the button on the GSP a onscreen menu would appear which allowed for code searching, hex viewing/editing, and code toggling. Later versions included movie viewers and a virtual memory card. As with the previous version it connected to the back of the console.

This version came on a CD as Sony had removed the port on the back of the Playstation. This meant that code searching was not possible and made the Pro version all the more coveted. Codes were saved to a custom GameShark memory card. The one advantage of the GameShark CDX is that it was compatible with the Playstation 2.

The Shark Link allowed for the PSX to be connected to a PC and allowed for cheat searching as the Pro version did. However, dumping of the memory was much slower. As it was released after Sony removed the parallel port from the PlayStation, the CDX uses the Serial Port instead. This Serial Port was also removed in later models.

Code use only disc that came packaged with PS2 GameSharks. You could not enter and store new codes but it had the fullest archive of any PS1 GameShark disc.