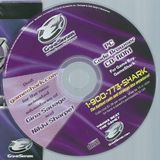 The GameShark for the PC is a Game Enhancer for Windows 95/98 based PC's, released by InterAct. It had limited support as few games ever had actual cheat codes released for it. One convenient feature of it is that after selecting the codes for the game it will automatically launch the game. For a short time new codes were also downloadable. According to a review on IGN, the game compatibility was pretty spotty.