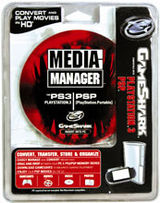 The GameShark Media Manager for the PlayStation 3 and PlayStation Portable is a Movie, Music, and Image organizer, in addition to allowing for GameSave back-up and importing. As with all GameSharks created for next-gen consoles, this one was created by Fire International, and distributed by Mad Catz. Video files (MKV, MPEG 1 and 2, VOB, AVI, XviD, and DivX) can be converted for HD quality playback on the PlayStation 3, and DVD files can be converted for playback on the PSP. It also allows for mp3 files, ripped from cd's or downloaded from i-tunes, to be transferred to a memory device for playback on the PS3 and the PSP. About the only traditional Game Enhancer feature is the option to import and export Game Saves to the PC.

Early on, the PSP version was packaged alone before PS3 compatibility was introduced.