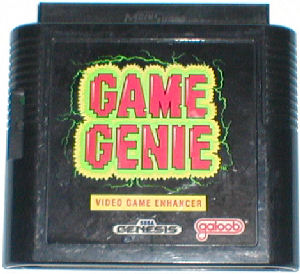 The Genesis Game Genie. Quite Nice. It's officially licenced too.

The Game Genie is a Game Enhancer for the Sega Genesis.This is one of the many Game Genie products available. It was released by Galoob. This particular version of the Game Genie required a Master Code to be entered in almost all games. It is also the first Game Genie to be officially licensed by the creators of the console. Five codes was the maximum amount allowable.

This Game Genie has a major drawback. It is incompatible with games which have a savegame feature. Using it with such games would erase the saves and force the player to start over.

Like the Game Gear Game Genie it was given Sega's seal of approval.