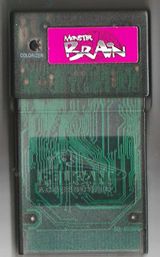 The Monster Brain is a cheat device for Gameboy/Gameboy Color. It is made specifically for the first and second generation Pokemon games. This includes Pokemon: Red, Blue, Yellow, Gold, Silver, and Crystal. The cheat device allows various elements from the Pokemon games to be edited, such as stats, names, and badges. The following can be edited by the device.

It was preceeded by the Brain Boy, which only covered Generation I games.

The memory menu allows save files to be backed up, restored, or deleted for any Gameboy or Gameboy Color game with SRAM saves.