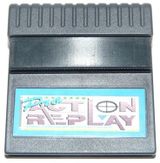 Like other cheat devices, the Action Replay acts as an extra layer between a piece of video game hardware and a game. Users input codes at the beginning of a session, which in turn will affect the signals passed between the game and console during play, thus fundamentally changing how the game operates, and potentially giving an extra advantage to players. Action Replays do not permanently alter ROM data, however, they have been known to corrupt save data if used incorrectly.

The Action Replay can be used to make games easier, for example, "hijacking" messages which deal with extra lives to "trick" a console into thinking the player has more lives than he/she should. It can also be used to unlock areas of the game usually cut off to normal users, such as test modes and potentially even unused items and features.